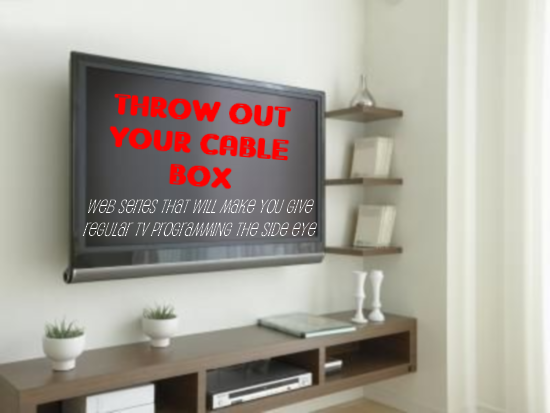 Lately many of my friends and I have lamented over how crappy [cable] tv programming is these days. All we seem to be inundated with are [fake] "reality" tv shows and tons of competition shows. Where did all the quality programming go? I'll tell you where it went, to the web. Youtube, lately, has been exploding with great web series and the black community is hitting it out of the park. Below are some of my favorite channels and shows by us created with us in mind on Youtube.

The Misadventures of AWKWARD Black Girl
I first learned of this series a couple years ago from Black Girl Long Hair and have been an avid follower ever since. You follow J as she encounters all kinds of socially awkward situations that we've all experienced at times in our life. Issa Rae, the creator and key actress in the show, is freakishly creative and funny. Directed by Issa and , they funded the whole first season from their own pockets. As the show's popularity grew, Pharell Williams took notice and his channel, I Am Other, picked up the show to start out their second season. You can watch season 1 HERE and season 2 on I Am Other's channel.WARNING: This series curses a lot but if you can get past that, it's super good.


Black & Sexy TV
I do not remember how I found this channel but I friggin love their programming! They have multiple series under them all created and acted out with great quality and entertaining story lines. Issa Rae collaborates with them a lot on projects. I have to list all their shows because I enjoy them all:

1) The Couple is a short web series that finds humor in life as a couple. One of my favorite minisodes is epidsode 6, Laid Up. Can we say hilarious?!


2) The Number follows a man's growing insecurity over his girlfriend's past, her sexual history way outnumbers his.

3) That Guy is the perspective of life through two young, single guys. Need I say more. Ladies if you want to know what men think about sometimes, this is how men think some times!


4) RoomieLoverFriends is a collaborative effort between BSTV and Issa Rae about roomates crossing the line and things getting real grey.


5) Hello, Cupid is their newest series that takes on online dating. As of now, there are only 2 episodes out but I like it so far. Side note, don't you think the pretty, chocolate sista is African Export's doppelganger?!

All 5 of these series can be seen on Black & Sexy TV's Youtube channel.


Inkspot Entertainment: The Unwritten Rule
I found this Inkspot through a pinner I follow on Pinterest. I fell in total love with their show The Unwritten Rules because as a black woman working in predominantly white companies my whole working career, I experience this stuff all the time! The show is totally hilarious and, for me, I can relate sooo much. They are taking donations to bring us a second season, support if you are moved to.


Childhood actress Reagan Gomez has a new show that looks promising called Almost Home. The show follows a sister and brother that move from Chicago, after the death of their mother, to Los Angeles for a fresh start. Only two short episodes have been released and they so far so good. I'm interested to see what will happen next. Right now the episodes are on Reagan's channel. They are raising money for the show so if you like what you see, consider donating to the cause. You pay for crappy programming now, why not pay for programming you actually enjoy?


How many great shows created for us by people that look like us did I just share?! I've contemplated ousting my cable many times. Now more than ever, I'm tempted to throw out my cable box and instead give these awesome, independent networks my money each month. Do you watch any of the web series? If there are great ones that I didn't list, share them in the comments so we can all check them out.